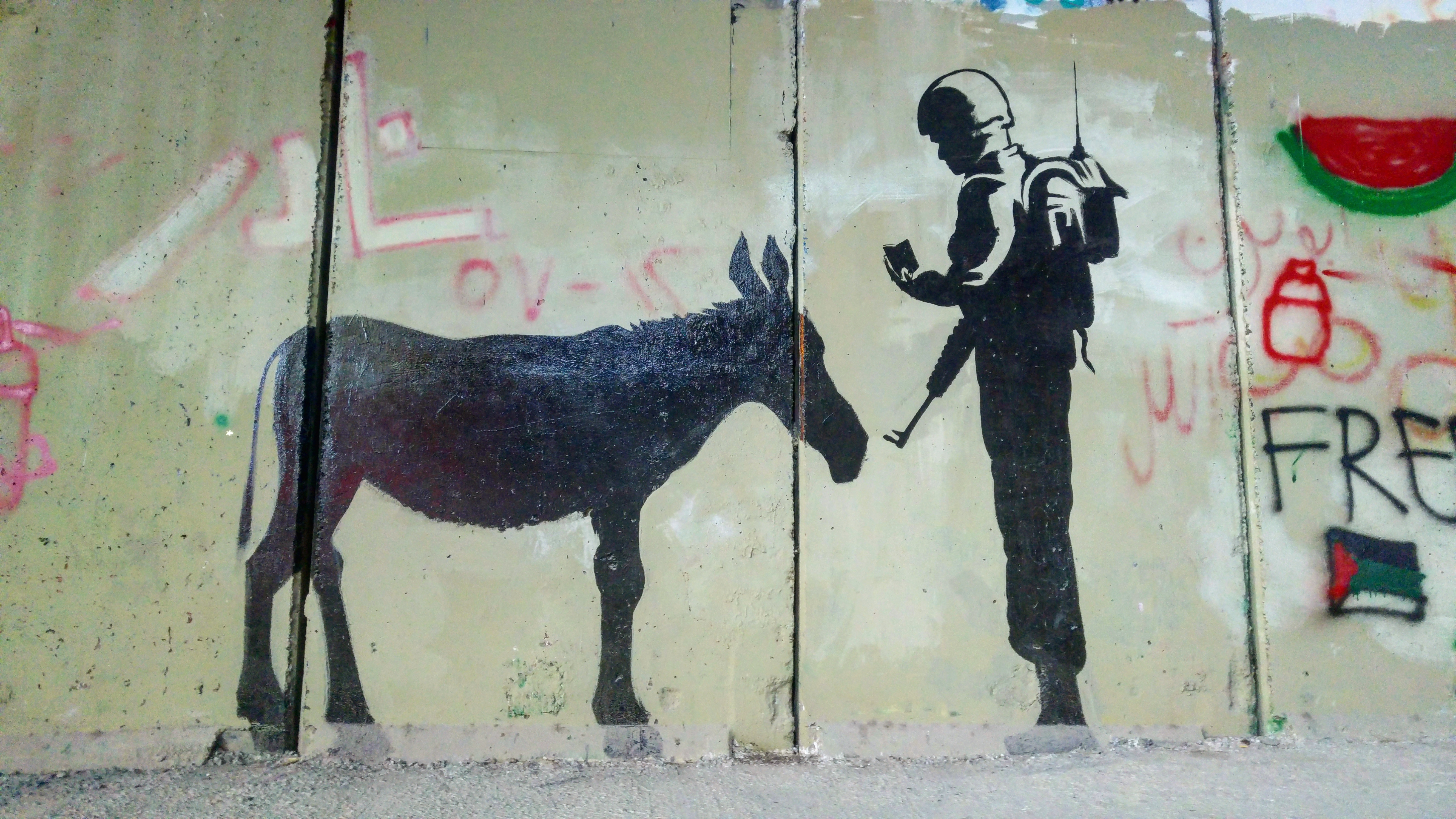 I am standing in a bomb shelter in a kibbutz, somewhere between the beaches of Eilat and the barbed-wired border of Jordan. It’s extremely hot. The rattling air conditioning is working overtime. Outside the Negev desert stretches itself out, with its more than 13,000 km² of sand, stones and rocks.

Around me is a group of Brazilians. They are with twenty of them, and one is even louder than the other. They make jokes with each other, giggle, play around, slap each other on the back, laugh out loud, and give a cheerful edge to the stale air of the small room. They came here as part of a Brazilian government program, to learn the art of organic farming from the kibbutz population. And me? I came driving from Palestine the day before, to teach this group of enthusiastic people the art of storytelling. The journey to here was an unforgettable one. Through an endless desert landscape, passing heavily guarded checkpoints, Jewish settlements, various kibbutz, military training grounds and a mysterious nuclear power station of which I was not allowed to take photos.

“Would you like to come with us to Palestine?”

A few weeks before I’m sitting behind my laptop in my cosy apartment in Leiden. I’d been looking for “something with storytelling and intercultural communication” for a while and searching the www. By chance, I come across a course that interests me, at the Storytelling Centre in Amsterdam. I phone them for more information. Unfortunately, they’re not offering the course for now. “But would you like to come with us to Palestine for an intensive course Storytelling for Trainers?” Arjen Barel, the founder of the Storytelling Centre and initiator of this ‘Share to Connect‘ project, overwhelms me with his question. However, I don’t have to think long about the answer. After a resounding YES, I’m on a plane to Palestine a few weeks later.

Palestine. A small piece of land with a violent history. A country about which many stories are told. Didn’t we all grow up with these stories? Headlines screaming at us about massacres and bombings, newsreaders telling us about Jewish settlements and Palestinian refugee camps. And who has never seen the historical photograph, on which the Israeli Prime Minister Rabin and the PLO leader Arafat shake hands? A new peace treaty had been signed, and now it was really going to be peace. Unfortunately. To this day – more than 25 years after these ‘Oslo Accords’ – peace is far from reality.

Bethlehem, the décor of an eight-metre-high separation wall

I’m staying near Bethlehem, on the West Bank, for a couple of weeks. According to the Bible and the Koran, the birthplace of Jesus*. Nowadays, however, this historic city is the décor of an eight-metre-high separation wall. Built by the Israelis as a ‘security fence’ for the safety of Israeli cities and villages against terrorists. For the Palestinian citizens a restriction of their freedom of movement. A military fortress which they can only enter and exit through heavily guarded checkpoints as long as they have the right travel documents. It is only one of the many examples of the heart-breaking battle between two populations who both want the exclusive right to live on this piece of earth. Both their ancestors are buried here.

“Sabāḥ ilkhēr**”. After three days, this Palestinian Arabian tongue-breaker finally rolls out of my mouth, kind of fluently. I smile cordially at the lady who serves breakfast while stirring in my Arabic coffee with cardamom. I feel at home in this country. Maybe because the somewhat looming energy – that there is something in the air and that you should always be on your guard -, feels a bit like Rio de Janeiro, the city that was my home for so many years. Sadly, in Brazil, people are separated from each other too. Poor from rich, black from white, favela from asphalt. The big difference is that in Brazil, unlike in Palestine, the walls, barbed wire and checkpoints, are invisible…

Strongly connected to a group of ‘strangers’

My group of fellow storytelling students consists of an interesting mix of people, cultures and ages. We have different religions, sexual preferences, styles, education, we speak different languages, have different ages and hobbies, but never before have I felt so connected to a group of ‘strangers’. Everyone here is here for the same reason: to discover the power of storytelling.

“I really don’t understand what this storytelling is about.” A comment I hear very often. Even though everyone seems to be talking about it, it still remains a vague concept but for many. The explanation, however, is quite simple: storytelling is the telling of stories. About life, about ourselves, about others. Researchers have discovered that the human brain has a natural affinity for stories.  With a good story, you get the feeling that you’ve personally lived, seen or experienced something. It deepens your understanding, respect and appreciation for someone. It helps you see the world through someone else’s eyes and provokes your curiosity. This makes storytelling a unique tool to inspire and connect.

The enemy is the one whose story you don’t know

The Storytelling Centre has extensive experience with applied storytelling. This means that in a conflict, you look for stories with a common basis. Arjen tells us, for example, that you bring together a Palestinian and an Israeli family who have both lost a loved one in The Conflict. “The common basis is sorrow. By listening to each other’s stories, these people can come closer together. The enormous personal growth that people go through during such a project, keeps surprising us,” says Arjen.

At the end of our training in Bethlehem, we are sent to various places and organisations where we organise a series of workshops ourselves as an internship. Because I’m one of the few people in the group who is allowed to travel to Israel, I go to the Negev desert to work with the twenty enthusiastic Brazilians. Most of my fellow students stay behind in Palestine. They will probably never be able to cross the border to Israel. Will they ever know peace? Will they ever be able to use the Share to Connect storytelling method to continue the conversation? Because, as writer and peace activist Gene Knudsen Hoffman once said, “the enemy is the one whose story you don’t know”.

It has been a year since I was in Palestine. The country, the people and the stories have left a deep impression on me. For that, I would like to thank my Share to Connect family in particular. Assalāmu ᶜalaykum, may peace be upon you,

*For Muslims, Jesus is the prophet Isa who is mentioned in the Koran as an important prophet and messenger of the Indjil, one of the Islamic Holy Books.